Ah the album is finally finished – so much so that I haven’t really listened back to it yet. The closest I came was doing the tracklisting and making sure that the lengths (in milliseconds haha) between songs were perfect – but even then the stress of a deadline meant I couldn’t really listen… it was very workpersonlike.

So hopefully this lightness of being will come across in this lyric blog for the first new song from the album that we are letting people hear – a song called B&B.

This little song was written just after Mickey’s daughter had been born. Mickey was having a bit of time off and so I was left in the studio alone (a lot of recent songs have happened this way). I had tuned the guitar down slightly and was playing a thumping 5thsy riff and the tune was there pretty much straight away. The chorus was a bit of an accident as because the guitar tuning was down I played a different chord with my hands than intended in my head and it gave the section a type of keychange which has remained. And there it was bashed out, loads of reverb, many vocals…. Until Mickey heard it haha.

Now it sits more refined – the accapella start was Mickey’s doing – he really wanted each section to be different and so it sits alone as an interesting outcrop. We had lots of problems with the production for bridge and chorus sections largely because of the contrast between the sea-shanty melody (with many vocal parts) and the driving but sparse instrumentation.

I think in that sense the song is quite a departure for us – raw and a little foreboding, but hopefully the passion in the lyrics make the link a little more plain. I think eventually when it came to recording the drums Mickey had really settled on the image he wanted for the song and by the time we came to re-record the guitars the idea was finalised.

Lyrically the words came quite quickly as I always had the “even my own mother cannot take me back” line in my head from writing the melody. I knew it was going to be about politics: specifically the patronisation of people by the political class in both ideology and delivery, and the way that my own region has been altered by the blue hoards of conservatism.

The title stems from a tweet by Grant Shapps regarding the last budget – “budget 2014 cuts bingo & beer tax helping hardworking people do more of the things they enjoy. RT to spread the word”. Beer and Bingo – because there’s nothing else to do.

I think the first verse is just frustration with the attitude put across by politicians that suggests that they think people are total idiots – policies light on detail, simplistic ideology, framing debates in headlines, constant ill behaviour. Plus from the other end of the scale the total demonisation of the less well off in the swingeing benefit cuts typified by the bedroom tax. I just think it is bizarre and to treat us with this brazen amount of contempt.

It really got me thinking about the north east getting so bashed up in the time of Thatcher – destroying lives and communities because of a need to dominate on an ideological level. I think the second verse tries to convey the depressing notion that beyond this pain, she also eradicated trades and skillsets that had been built for hundreds of years without the prospect of anything new, or transferability. To extinguish a trade, a way of life…. Wow….. That’s a pretty crazy course of action.

It’s almost like she stole those years from us – and it feels a little like it is being echoed now. Taking away what someone relies on is oppression, and this is being felt in communities across our country today – horrified in the knowledge that it will continue until people are so battered that they accept it. The worst part is if you look closely enough, past Grant’s apparent carrot you can see the joy in the eyes behind the ghastly stick, and they look frighteningly familiar.

I codify: next week there’s a new born tax
Not married so I can’t relax
Honest so I don’t react, yet.
Silence has kissed my back
Licked fickle by the bedroom pact
A rumour never moves with tact, no.

A heart like a candle
Melted with a frying pan handle
Left on the heat too long
Now only can I sing this song:

So I drive around this town
Thatched new by the thrust of the cuts
Bollards and the legacies they all outgrew.
Coastal but wrecked by blue
Ripped ships from the skills we knew
Moreish so you’ll see this through.

A heart like a candle
Melted with a chip pan handle
Left on the heat too long
Now only can I sing this song:

I’m sleeping in a box
No windows, no door locks
My head is a shambles
Kipping in a row of brambles
A heart like a candle
Melted with a frying pan handle
Left on the heat too long
Now only can I sing this song:

Listen to B&B by clicking here! 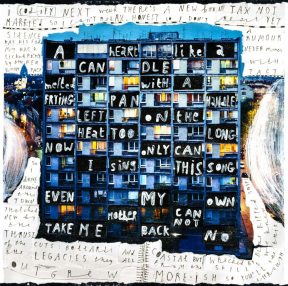