I think that this is really the most emotionally honest song that I’ve ever written, and also one of the simplest – it is just a message to my little boy William: my hopes for him. It’s a very optimistic tune and took place so late on in the recording of the album, that it became clear that this was the song to open the album.

We only realised once we’d finished recording it that it doesn’t really have a standard form – our songs often follow a particular pattern A B A B C A B, where A would be a verse and B chorus, C coming as a middle 8 or lift towards the end: but this song ignores it all, and the fact we weren’t really aware of it that until we’d completed it shows (in theory) that it works…

The form for this song is A B C D E, which is quite bizarre but I think it just happened during the writing process as there wasn’t a point where we imported an idea from elsewhere, it just all occurred naturally.

Once again Jack from Bwani Junction recorded the drums and I remember it was a really beautiful session – I don’t use that word lightly, and I definitely feel Jack put a lot of feel and emotion into the drum and combined with Mickey’s spacious drum sound, it gives the song a great deal of depth – I love the drumming on this song….

Building upon the percussion was quite easy – we worked on each section individually and the parts didn’t need too much sculpting. Before long the middle of the song was formed with only the beginning and the end remaining. All the acoustic guitars were then recorded in Mickey’s kitchen, and even though the fingerpicked, sparse sound isn’t really something we’ve done before I think it bookends the song nicely.

There were then just the vocals to do…. I normally don’t enjoy recording the vocals as I am quite mathematical about it – I do a certain amount of takes and (to be honest) over-think certain notes that often I create a stress about nothing, but I think the subject matter of this song really helped and it was actually amazing to sing – it just felt right. Often for us, aspects of recording (asides when I do guitar takes) are quite controlled – but this was like singing a song live and I had a real adrenaline rush when recording it. Sometimes being emotionally unhinged when you are recording a song has quite an impact when you listen back later – it’s normally unusable, but in this case it worked perfectly. Again, the backing vocals seemed to stick to the lead part well and recording them was a bit of a doddle.

For the beginning of the song, we again did something quite different for ourselves – Mickey really wanted the start to be one-take and conversely the last thing we recorded for the album, so on the 27th of December we set up in Mickey’s kitchen. I know the start is quite strange but he wanted to capture the element of live performance – I take a drink from the tap, then walk to the microphone, pick up my guitar and play. As with the end it is quite empty but works nicely I think….

The final additional part that I want to mention is the spoken section. When me and Mickey were little our Mam and Dad would set up a tape recorder when we played just for memories sake – I suppose it was the 1980s version of an iphone, and I remember listening back to these recordings when I was older. I’ve always wanted to do this with me and Mickey’s little boys, William and George who are the best of friends: overlaying it with some of our music.

One Saturday afternoon we did just that, and then over the course of an evening I loved editing this 2 hour long recording into the conversation you can hear on the song. That very good, oh-oh, oh no, where are you? Back home. Me back. Sit down here. OK….. It’s funny, but it’s my favourite bit of any song we’ve ever recorded, and it’s not really us haha….

I suppose the thing I am proud of with our music is the fact that we’ve always followed our hearts and stayed true – we do what we love, and we work very hard but we’ve never compromised ourselves for it. If I could pass one message onto my little boy, other than how much we love him, is just to be true to himself and keep an open mind – there’s always more to learn… 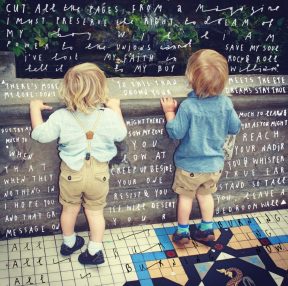 Power to the unions
Cannot save my soul
I’ve lost my faith in
rock and roll: tell it to
my boy William.