We all sat down together in December and made some pretty crucial decisions, the most important of which was our musical plan for 2014. We’ve got lots of songs written so we decided we’d attempt to make 3 EPs and an album within a 12 month period – this is the first of those offerings…

We’ve called it The Gentle EP and the tracklisting is as follows:

Little Italy
The Blur, The Line and The Thickest of Onions
Coalition of One
Early Retirement

For the first time I think we’ve collected together four songs which are a lyrical representation of our opinions on life – all first hand accounts. I’ve often found it difficult to approach an issue head-on so have often used the framework of a story…. Really this EP is far more naked in that sense… every line is a crafted dilution of what I think. It certainly isn’t intentional, but I do think it marks a slight change in approach.

The music also lilts more and is not as rambunctious as you might expect, but I suppose that’s noted in the title of the EP – a lot of music at the minute isn’t really gentle. It’s brash and bold and desperate for your attention… this is a bit of an anathema.

We’re going to make all the music available for you to listen to in due course, but for the minute you can have a listen to Little Italy…

Also, we’ve decided to release a physical copy of the EP – something we’ve never tried before and possibly won’t do again (it’s nice to have a one-off). We are going to personalise each copy and have limited it to a number with no hidden meaning – 300. People have always asked for something like this, so we thought we respond in kind. 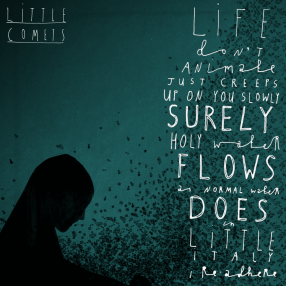