Listen while you read? Stream it now – http://Smarturl.it/3MinuteFaltz

Ahhhhhhhhhhhhhhhh I think I might explode when we play this live. It’s as close to the sound you’d get if you plugged my brain into a system that translated thoughts into music as you can get. I’d had this idea ages ago of doing an updated version of “We Didn’t Start the Fire” but when I read into it I discovered that the song wasn’t the lyrical anti-bucket list I assumed – it was from a conversation Billy Joel had with someone who basically said nothing had happened in the last fifty years so Billy went through every year of his life and catalogued the major cultural and political events – total genius… but I shelved the idea because it therefore didn’t fit in with my original interpretation of the song…. Either way it must have festered for a while and re-emerged in the form of Three Minute Faltz..

I remember writing this one with Mickey in the garage early Autumn last year (I’ve got the original voice memo phone recording if anyone wants a laugh)… but it is interesting to listen to the first iteration of the song – it came together in about 20 minutes and was full of beans – I felt lifted singing it and it became one of those songs where I couldn’t wait to solidify the lyrics – I had so much to cram in… it was intentionally like a stream of angry consciousness because let’s be honest when you list all the stuff that is wrong with the current human world you realise that we are completely ferked…. So you might as well pore the beauty left into something creative…

The lyrics were quite quick by my usual standards as I had certain lines to hang on and build off – toxic masculinity is now a fragrance on aisle three… whales have eaten all the plastic… duty to the screen in your hand eventually will destroy ya… so it was just  case of filling in the gaps with things that piss me off – some seriously, some massively, some personally, some in a totally omnipresent sense.. it’s like a passioned rant.. but one which if you look into the detail hopefully you can see that it is actually quite nuanced. Headlines in papers by nature are almost poetic as they have to encapsulate a story in under a sentence, but if you alter the words a little then you can have real fun and make a point. I suppose every line in this song is like that – it could be a headline in some sort of paper.

Recording wise this one wasn’t too tough although – as usual – we got a bit of demoitis… we spent a day recording it and it sounded great but far too rough in a playing sense… I had played the drums using only my hands on Mickey’s son’s drum kit so although it had good vibe the timing was a little suspicious… but there were lots of elements to love – we didn’t use a click so the tempo had a really natural flow to it (I wish the finished recording was more like the demo in that sense) and all the production parts – backing vocals, piano, percussion – worked instantly… it’s just a shame we didn’t spend a little more time on the demo as it would have been the final recording. Going forward that’s something to look at haha…

But yeah, all in all we are pretty happy with it – it’s a fairly good summation of what we feel as people at the moment, which is always a good starting point for a  Little Comets song. 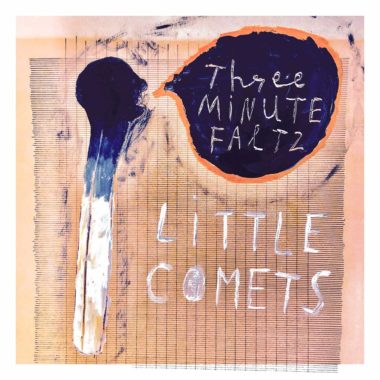 Total sexist adoration spills across a stilted nation
All the males that are equipped with shoulders made of oven chips
Overeating, exercising, diet fads and those denying
Climate change is in abundance, building homes on frozen tundras
Texting while you should be driving, Earth is flat but you’re surviving
Eating only steaks and hoping global warming’s some sort of hoax

And now you’re feeling European, I wish you were a human being
Whales have eaten all the plastics, fill the sea with geriatrics
Solve the ills of social care until they wash up everywhere
Cos I’ve always told ya they put things in the water
And toxic masculinity is now a fragrance on aisle three
We spray it on ourselves without the slightest hint of the irony

Everyone’s dead but that was in the future
While you’re alive just contemplate your duty to the
Screen in your hand eventually will destroy ya
Is this au fait or just my paranoia
Saying something about nothing?
Slip me a pill to kill this familiar
Feeling that I’ve been out on a limb, yeah

Everything is overrated, axioms of grief conflating
Sentimental throngs of people mourn for things
Designed to keep them blithely pining God’s attention
Look around you, who should mention
Clearly it’s intended to make you feel dependent
And sugar is the new religion, pile it in to all your children
It’s ok, relapse, repeat, get ripped you know and whiten your teeth

Seeds in the clouds and drugs in the water
Sun in the sky to give you melanoma
Stay in the house and irrigate your cuticles
While outside the boys build another death star
And you say something close to nothing
Because you thought you were on top of it
And now you realise nothing’s stopping it
Maybe I will, maybe I won’t
Go for the throat, humanity needs another sick note
Fight in the aisles consuming hallelujah
Exist on your own terms, else they’ll sock it to ya.